It isn’t long since the iOS 7.1 has been released and people have started looking for the next iOS, which is supposed to be iOS 8. How eager people are! However, it is very normal for people to seek what Apple is up to, since the device release season is coming. And following the trend, it is expected that Apple will release its newest iOS firmware with their new device or a few months ahead of the new device’s release. Most likely, the earlier version will be a developer preview. iOS 7 is pretty old and so is iPhone 5S and 5C. Feeling surprised? Yes we know how they seemed they have just been released all these days and suddenly it feels too old.

However, everyone is keen to know when the next iPhone, probably the iPhone 6 is coming out along with the new iOS 8.

Apple’s newest software updates are usually announced through the Worldwide Developers Conference. This year’s conference is scheduled to take place by June 2 to June 6 at San Francisco. If Apple doesn’t change their tradition then in this developer meet up, Apple developers will be talking about the newest iOS. As rumors say, we also expect that there won’t be any noticeable outlook changes in the iOS 8. Apple might keep the look that JonyIve designed. If you might remember that iOS 7 was the major overhaul to iOS’s looks after very long so it is expected that this new look will continue to occupy the newer iOS versions for the next few years.

And Apple might also announce a wearable technology. Every giant company is doing their research on wearable technologies now; how could a giant like Apple just not think anything about it? The consumers can soon expect an iWatch or similarly named gadget in the form of a smart watch. Hopefully, iOS 8 will have integration for that as well.

iOS 8 – Mostly a Performance Update, Not the Visual Update

Don’t expect many visual changes in the next iOS update. Frankly, there is not point of doing so. The users need time to get used to a new user interface. If there’s another new interface just within a year then it might create an adverse effect. Apple would never want to take that risk. 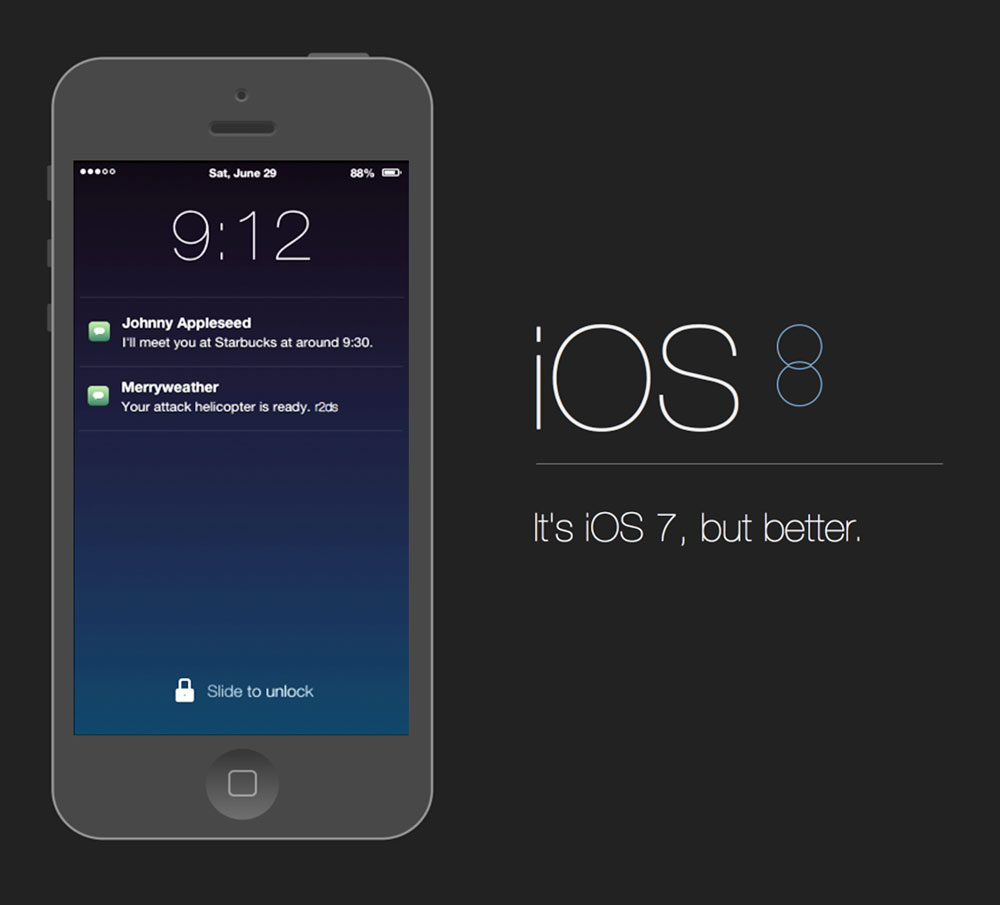 During any major software revamp, you can’t just avoid bugs from appearing. Keeping the aesthetics from iOS 7, it is important to make the next software update bug free. Everyone believes that Apple would be focusing on that aspect.

To compete with Galaxy S5’s fitness apps, Apple might make use of their M7 motion co-processor by developing some fitness based applications. Right now, there’s rarely any built in iOS app that uses the M7 processor data. Including some very own fitness app will really be a giant leap against Samsung, if Apple could execute it properly.

Apple Map was a laughing stock for long. However, it is a reliable one now. But Apple should still work a lot on the map app to make it go against Google Map. Hopefully the revamp will take place in the iOS 8.

There will be updates to every app, maybe not much noticeable but since Apple needs to keep their competition up against the rivals, they wouldn’t want to give the rivals any scope for criticism.