What is Hyper Threading Technology in Processors

Hyper Threading technology was developed by Intel for their processors and appeared in the year 2002 and become visible in Pentium 4 Processors first. In general, what is Hyper Threading Technology can be explained as, technology which allows each core of the processor to work on two different tasks at the same time and it is termed as multi tasking processing.

A single core of execution is known as thread. It is a part of a program that executes independently of other parts and concurrently with other parts of the program.

Example : You can do spell check in Word Program  as well as input text in to the application simultaneously  In hyper threading those two tasks are executed in same time which increases the performance and speed of processing. 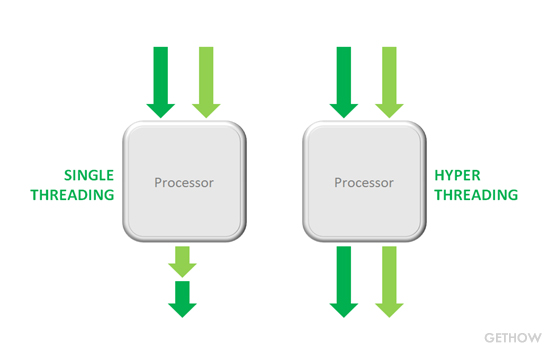 This technology works only when two processors with high processing requirement are running, such as a video editing tools and an antivirus. This technology is also available for desktop replacement notebooks, in the mobile Pentium 4 Processor. In addition, the software is written for multi processor computers are capable with this Hyper Threading technology.

Hyper Threading is a new revolution for future computing because it is not only creating new targets for us but also makes our dream bigger.