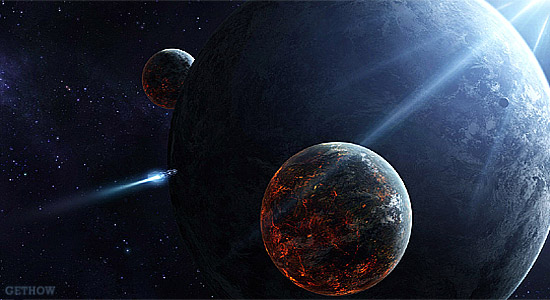 We know that the Moon is the small sub planet in the Solar system which orbits the planets of Solar System. There is a big list of such moons in our solar system and some planets have most moons like Jupiter with 63 moons, Saturn with 61 moons, and Uranus with 27 moons, Neptune 13 moons and Earth with 1 moon.

Let’s see the top 10 largest planetary moons of the solar system where we survive.

1. Ganymede (Moon of the Jupiter)

Titan is larger than mercury and Pluto. We have no idea what its surface looks like because it has such a dense atmosphere, but radio telescope observations suggest that it may have Ethane ‘Oceans’ and ‘Continents’ of ice or other solid matter.

3. Callisto (Moon of the Jupiter)

Processing a similar composition to Ganymede, Callisto is heavily pitted with craters, perhaps more so than any other body in the Solar System.

Io has a crust of solid sulpher with massive volcanic eruptions in progress, hurling sulphurous material 300 KM (186 Miles) into space.

Our own satellite is a quarter of the size of earth, the 5th largest in the Solar System and, to date, the only one to have been explored by human.

6. Europa (Moon of the Jupiter)

Although Europa’s ice-covered surface is apparently smooth and crater-free, it is covered with mysterious black lines, some of them 64 KM (40 Miles) wide and resembling canals.

7. Triton (Moon of the Neptune)

Triton is getting progressively closer to Neptune, and it is believed that in several million years the force of the planet’s gravity may pull it apart, scattering it into a form like the ring of Saturn.

8. Titania (Moon of the Uranus)

The largest of Uranus’s 27 Moons, Titania was discovered by William Herschel on 11 January 1787. It has a snowball like surface of ice. Its size estimate was revised data from Voyager 2.

Saturn’s second largest moon was discovered on 23 December 1672 by Jean Dominique Cassini. Voyager 1 confirmed that icy surface is pitted with craters, one of them 225 KM (140 Miles) in diameter.

Oberon was discovered by Herschel at the same time as Titania, and given the same name of the fairy king husband of Queen Titania. Data from Voyager 2 relegated Oberon from 9th to 10th place in this list.

These are the top 10 largest planetary moons of the solar system.