The Global Positioning System (GPS) is a network of 24 navigation satellites orbiting the earth that people can use to pinpoint their position. The satellites orbit at a height of 20,000 Kilometers (12,500 Miles). A GPS receiver picks up signals from any of these satellites that are above the horizon. It uses information in each signal to work out how far away is from the satellite. It can calculate its position on the Earth’s surface when it has information from at least three satellites.

A basic GPS receiver shows the latitude and longitude of its position on its screen. More advance receiver, especially those designed for use in vehicles, show their position on a digital map. These receivers often show extra information, such as vehicle’s speed and the length of the journey.

Some receivers warn drivers if they exceed the speed limit for a road and even tell drivers which traffic lane to use at next junction. Directions are shown on the screen and also spoken by a synthesized voice.

The people like travelers, tourists and new person who doesn’t know the path uses the GPS devices to travel around the world. You never need to ask for a path from somebody else, you just have to instruct GPS device a current position or a destination position after that the best path for you is decided the by GPS satellites and other networks itself and all the instruction is given by GPS device itself step by step to you.

An ordinary GPS works with the help of three satellites, where first two satellites defines the estimated position of the user and another third satellite pinpoints the user by their accurate position. Sometimes signals can be taken from the Earth network also like Mobile Networks, Telephone Networks and Wireless Networks for estimating the position of user on Earth when a satellite could not define the path of the user. 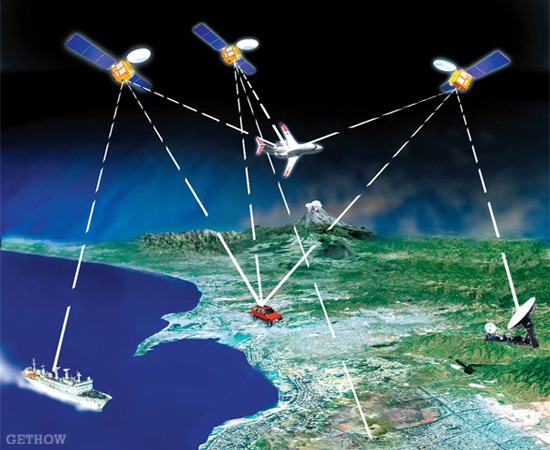 2 thoughts on “How does GPS (Global Positioning System) Works”