ChatWing : The Best Choice of a Chatting Tool

Entrepreneurs have been setting up sites for the main purpose of increasing their target audience and bloggers set up theirs in order to share their thoughts and ideas. Both may have different objectives, but they share the same similarities – both need to interact with their readers more. With that in regard, they need to use methods and tools in order to engage with their viewers and clients more. And ChatWing, a live chat application, might just be the tool they’re looking for. 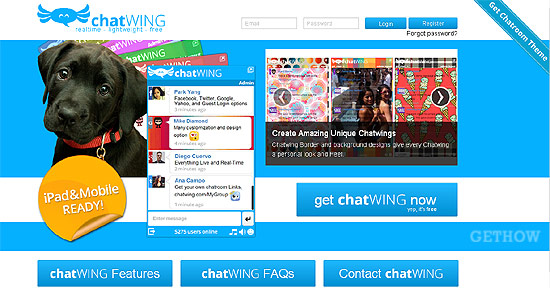 This live chat software boasts simplicity in its usage, and complexity in its features. That’s because site owners can use this chat app by simply copying a few lines of HTML code and pasting it on their sites. Yet as said before, contrary to its simplicity, ChatWing is complimented with a lot of features that makes it one of the tools that can deliver the best chatting experience both to the user and their chatters. Here’s a brief summary of some of its features and their uses.

ChatWing is fitted with a log-in interface that is socially integrated with Facebook, Twitter, Yahoo and Google. This gives chatters the ease in logging in since they can gain access inside the chat room by using their accounts on one of these sites. They can also log-in using a ChatWing account or anonymously as Guests.

This chat software is also the only chatting tool with a very detailed customization feature. The user has the capability to make his chat room into a very unique-looking one befitting his preferences or the theme of his site. He can change its appearance; even apply his own unique image as its background theme; change the fonts and embed music and more. The changes one can make to his chat room are so many that it would look nowhere near than it used to be after its modification.

A tool where one can easily have a conversation with each other is not only what ChatWing is good for. It ensures the users that the chat room is well protected through its security features. Spammers and other offenders will have no room inside chat room as they can be banned immediately by the users with ease, along with their messages – they can be deleted by the users too. Setting up word filters would make it even better as it can block profanity and other words the user doesn’t want to be shown on the chat room.

Assigning moderators who can watch over the chat room would make the user’s job much easier. Since they can also ban people, they can act as substitutes whenever the user is away. This is very important, as securing the chat room is very advantageous to the site. A clean chat app is definitely much better to chat in than one riddled with spam and obnoxious people acting like they own the place.

The chat software is an extension of the site where people can voice out their concerns about it directly to the site owner. That’s why it is important that it must be properly managed – so it becomes a place where everyone can exchange credible information without being distracted and interrupted by spammers and such. By doing so, clients and readers alike are surely to enjoy their time while chatting with the user or themselves and that is definitely not a bad thing as it increases site interaction – one of the important factors in SEO.

ChatWing still has a lot of features in store for its users and with constant development, it simply gets better. For site owners looking for a chatting to augment their site with, they should try using ChatWing. They surely won’t regret spending a single penny for it, because they won’t – ChatWing is totally free.